Between 1819 and 1926, four brave women ruled over the princely state of Bhopal. These were Kudsia Begum, Sikander Begum, Shah Jahan Begum and Sultan Jahan Begum. Despite opposition from powerful male claimants, the Begums stood firm and developed the state.

It all started with Kudsia Begum, (also known as Gohur Begum) who married a nobleman called Nazar Muhammad Khan. On the fateful day of 11 November 1819, the royal family went to neighbouring Islamnagar to hunt. It was then, that Kudsia Begum’s younger brother, the 8 years old Faujdar Muhammad, drew a pistol from Nazar Muhammad’s belt and started playing with it. In a freak accident, the little boy killed the reigning Nawab of Bhopal. He died at the age of 28, after governing Bhopal for three years and five months.

With the consent of the nobles of Bhopal and the British government, it was decided that Nazar Muhammad’s nephew Munir Muhammad Khan, should succeed under the regency of Kudsia Begum and should eventually marry her daughter Sikander Begum.

Munir Muhammad’s authority was opposed by Kudsia Begum. Mr Meddocks, a political agent of the East India Company, interfered to solve the matter between the two. An arrangement was made in which Munir Muhammad consented to resign in favour of his brother Jahangir Muhammad Khan, for a compensation of Rs. 40,000/- a year. It is believed that Kudsia Begum, wanting to retain power in her hands, delayed the marriage of her daughter. Despite her mother’s best efforts, Sikander Begum was married to Jahangir Muhammad Khan on 17th April 1835. Kudsia Begum continued to administer the state which caused differences between her and the young Nawab Jahangir Muhammad Khan. With time, conflict arose between the Nawab and Sikander Begum as well.

One day, on the occasion of a feast, the Nawab plotted to forcefully seize Kudsia Begum and Sikander Begum but the Begums escaped safely to their palace and dispatched a military force to capture Nawab. Kudsia Begum retired from the administrative affairs of Bhopal with a grant of 5 lakhs per annum. In 1877, she was decorated with the Order of the Imperial Cross. She passed away after four years at the age of eighty-two and bequeathed her personal property to her grand-daughter Shah Jahan.

Sikander Begum gave birth to a girl child named Shah Jahan Begum on 29th July 1838. The British government recognised the succession of the Shah Jahan Begum and proclaimed her as the chief of the State on the 11th of April 1845. Her mother Sikander Begum was appointed as regent. The Regent queen spearheaded many policies for the betterment of her subjects. In 1854, a Medical department was set up by Sikander Begum and a qualified Yunani medical officer was appointed. Under her reign, the first survey of the state was also conducted.

During the First War of Independence, Sikander Begum allied with the British for which she was threatened by her own troops. She suppressed mutinies at Sehore, Saugor and Bundelkhand. Based on her loyalty to the British during the mutiny and, after the restoration of order, Sikander Begum urged that she should be regarded as the ruler of Bhopal, not as the Regent. On 3rd March 1860, Sikander Begum was formally recognised as the chief of Bhopal by the British Crown. Mr. Hamilton, the agent to the Governor-General sanctioned this order. Order of the Star of India

During her reign, Lord Canning the then Viceroy of India, while praising the Begum of Bhopal, said, “state which was threatened by our enemies, you as a woman, guided its affairs with a courage, an ability, and success that would have done honour to any statesman or soldier...such services must not go unrewarded.”

In November 1861, the Begum was given the highest Order of the Star of India at Allahabad. In the year 1864, Sikander Begum went on a pilgrimage to Mecca and became the first woman ruling chief to do so. After her return, she fell ill and died on October 30th 1868 at the age of 51. She was buried in the Farhat Afza garden, Bhopal. Sikander Begum’s daughter, Shah Jahan Begum was invested as the ruler of Bhopal on 16th November 1868.

She was married to the commander-in-chief of the State. Shah Jahan Begum followed in the footsteps of her mother. She started the first day-school in 1860, she founded two girls schools and seventy-six primary schools by the end of her reign. In 1871, to further encourage education, she made it mandatory that no person would be given a post in the State Office unless they held a certificate from school or college. Her interest in architecture is indicated by the mammoth projects sanctioned by her. An example is the Qasr-e-Sultani Palace (which is now Saifia College) and the Taj-ul-Masjid mosque. She also invested heavily in public-work projects such as construction of a railway line between Hoshangabad and Bhopal. In May 1871, Shah Jahan Begum married Maulvi Sayad Sidiq Hussain. After the second marriage, she retired behind Purdah. For her many accomplishments, Shah Jahan Begum was made Knight Grand Commander in 1872. During her reign, she obtained the sanction to establish an Opium agency in Bhopal in 1879.

Shah Jahan Begum died on June 16th 1901. She was succeeded by her daughter Sultan Jahan Begum, who was born on 9th July 1858. In 1905, Sultan Jahan Begum met the Royal Highnesses, the Prince and Princess of Wales at Indore and was given the Order of Chivalry, Knight Grand Commander. Sultan Jahan Begum conducted the administration of the State with her eldest son, Nawab Muhammad Nasr-ul-lah Khan.

By 1911, King Edward VII of England had passed away and George V was to be crowned as the new King. Sultan Jahan was invited to attend the Coronation in London. She attended the coronation, dressed in a Burqa with her awards worn on the outside.

Sultan Jahan Begum contributed heavily towards the emancipation of women in India. To promote independence among women, an Art school was started in the year 1905 for widows and destitute women. In 1914, she became the President of All-India Muslim Ladies Conference. And in 1918, she founded the All India Ladies Association. It is well known that Sultan Jahan Begum and her mother provided financial support for the preservation and conservation of the ancient Buddhist Stupa at Sanchi. John Marshall, the Director-General of the Archaeological Survey of India (1902 to 1928), acknowledged her donations by dedicating his important volume “A guide to Sanchi” to Begum Sultan Jahan. Sultan Jahan also funded the Archaeological Museum that was built there in 1919. This museum was later renamed as Sanchi Museum. Till today, her greatest legacy is the Aligarh Muslim University which came into being in 1920. She became the founding Chancellor of Aligarh Muslim University and the first Indian woman to become a chancellor of an Indian University. A true visionary, she wrote biographies and books on education and health, for example, Bachoon Ki Parvarish, The Story of a Pilgrimage to Hijaz, Tandurusti (Health), Hidayat Timardari etc. 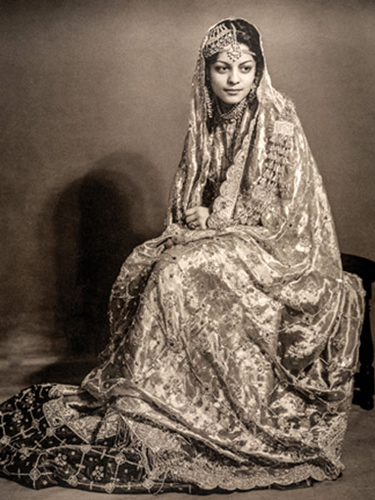 He was the last ruling Nawab of Bhopal, the state later merged with Madhya Pradesh in 1956. On May 12 1930, Begum Sultan Jahan died at Qasr-e-Sultani Palace in Bhopal. The rulers of Bhopal state were honoured with the title of Her Highness Nawab Begum and received a salute of 19 guns. She suppressed mutinies at

Based on her loyalty

the ruler of Bhopal,

highest Order of the Star of India

married to the commander-in-chief

she retired behind Purdah.

Art school was started in the year 1905