On 1 September 1668, the ship named 'Constantinople Merchant' touched the coast of Surat. It had brought a copy of the Royal Charter of March 27th 1668, through which the Port and Island of Bombay had been given to the English East India Company "to be held in free and common soccage, as of the Manor of East Greenwich," at a rent of 10 Pounds per annum, payable on the 30th September each year. Thus began the story of the establishment of the city of Bombay , which is presently the financial capital of India and is one of the country's largest metropolises.

The Directors of the Company in London had already informed their factory employees in Surat about the transfer of Bombay via a letter written on 27 March 1668. On the same date they had written and requested the Crown’s Governor in Bombay to give effect to the transfer. On 30 March 1668 they declared their decision to appoint the President and Council at Surat to receive the possession of Bombay. Now that the charter had arrived, the Surat Council held a consultation on 3rd September 1668 in which it was decided to send their Commissioners, Mr. Goodier, Capt. Henry Young and Mr. Streynsham Masters to take possession of the Islands. The three reached Bombay and on 23rd September 1668 the English officer, Capt. Henry Gary formally transferred the island along with its live and dead stock, arms, ammunition, men, and cash amounting to 4879pounds, 7 shillings and 6 pence. Sir George Oxenden, the President of Surat Council, became the Governor of Bombay.

What the Company had come into possession were seven islands, named Bombay, Mazagaon, Parel, Worli, Mahim, Little Colaba or the Old Woman's Island, and Colaba. The landscape of these islands varied from low hills, tidal flats, mangrove forests, and salt pans. There were three great breaches or inlets through which the seawater gushed in during the high tide in the space between the islands. When the water receded, it left behind swamps of salty water. While it was possible to cross over from Bombay to Mazagaon during low tides as the sea was very shallow in that area, the gap between other islands was navigated by boats.

Since 1534 the islands had been a part of the Portuguese territory. The Portuguese had used them for agricultural purposes and had not undertaken any major construction except for a few causeways to cross over the flats. However, for the English Company these islands were of great political and economic interests. It had even tried to wrest it from the Portuguese, albeit unsuccessfully, in 1627 with the help of the Dutch East India Company. In 1661 Bombay was given to the English Crown through Article 11 of the treaty (Treaty of Peace and Alliance between Portugal and Great Britain and of marriage of Charles II. with the Infanta of Portugal, concluded at London, June 23, 1661 ) accompanying the marriage of King Charles II and Catherine of Braganza of Portugal. However, due to the indifference of the King to the value of these islands and the expense involved in holding on to them, the Crown was much too eager to get rid of them.

The Company was keen to develop Bombay as it offered an excellent, deep sea, natural harbour which could be used in all seasons. It could also afford easy and direct communication with the English factories in Persia, Malabar Coast and the Spice Islands (Maluku Islands). It could also give them better protection from pirates as well as from the Indian powers and European rivals. The President of the Surat Council and the Governor of Bombay, Gerald Aungier, gave comprehensive proposals for the development of Bombay in 1671 and on gaining approval from the Directors, measures were initiated to fortify the island, build docks, and develop institutions for its civic and judicial needs. The Company officials started repeatedly requesting the directors to shift the Company headquarters from Surat to Bombay.

The Surat Council informed the Directors about the three main breaches that needed to be stopped. These were the great breach, known as Breach Candy, between the island of Bombay (the Malabar Hill) and the island of Worli, the breach between Worli and Mahim, and the one between Mahim and Parel. In 1674 Governor Aungier employed the service of an engineer, Herman Bake, who prepared a map of the island specifically designed to highlight the inundated areas and the inlets that caused them. The Bombay government sent Bake to deliver the map personally to the directors.

At first, the directors of the Company were not keen to spend money on reclamations, hoping that it could be undertaken by private individuals. They put forth certain terms and conditions, for renting out land for drainage, such as granting a lease of 99 years with a small quit-rent payable to the company. Alternatively, land could be rented out on the condition that the work of reclamation be completed within 7 years. It took another decade for the Directors to be convinced about making dams and reclaiming land when the deaths due to malaria increased. “Redeem those drowned lands of Bombay,” they wrote on 7 April 1684. In the same letter they even went on to give details about how to go about the task. They told the Company officials in India to give the job of making embankments and reclaiming the land to undertakers. The latter were to be paid by the Company every Saturday night, part in money and part in rice, for every day’s work done by each man that they employed in their service. Over and above this, the undertakers were to be paid a sum of money when the whole work was completed. They suggested building sluices in the dams to drain the ground if it is used for agriculture or to let in the sea water if the land is used for the manufacture of salt, leaving the option of choosing either use to the company in India. The part of the land near the seashore which was submerged under water was to be filled up with earth from the higher parts of the land and was to be brought to the level of the sea. The sluices were to be made at such a height that would prevent sea water from re-entering when they were opened to drain out rain water. In 1685 the Directors told the Company to shift its HQ to Bombay, which was given effect on 2nd May 1687.

Thus, after a long period of exchange of letters and careful deliberations, the first water inlet to be closed was the Umarkhadi breach between the islands of Bombay and Mazagaon sometime after 1690. Mazagaon appeared as a separate island only till 1690-1.

The work progressed further under the governorship of Nicolas Waite, who appointed William Aislabi to undertake the work of closing the inlets to the north in 1704. For this the construction of five embankments was started which had sluices to allow water to drain from the land at low tide. Three of these were completed by March 1711, which consisted of two at the north end of Parel and one between Parel and Mahim. The embankment between Mahim and Worli was also completed by January 1712. Through these works the island of Mahim was connected to Parel and Worli. The land recovered due to the closing of the inlets was rented out to cultivators known as Kunbis under the 'Toka' tenure system, in which the produce (mainly rice) was to be divided between the company (the landowner) and the cultivator. 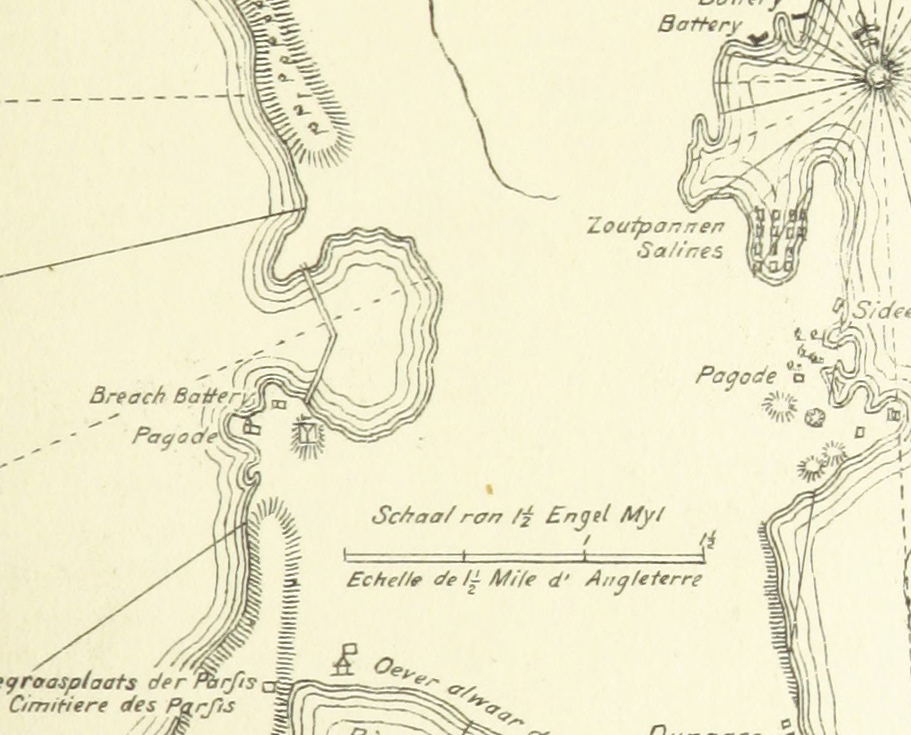 However, the biggest challenge was the closing of the great breach between Bombay and Worli, known as the Breach Candy (the word ‘Candy’ was derived from the Marathi word ‘Khind’ which means a break in the rock ridge ). The Company's engineer, Mr. Bates proposed the making of an embankment to close the gap and the Bombay Council approved a monetary provision of Rs. 20,000 for it. Though Bates originally predicted it would take nine months, the work which started in 1720 was not finished until 1728. The wall was not strong enough to stop the seawater and frequent repairs had to be undertaken. It was only under Governor William Hornby (1772-1784) that the Hornby Vellard (from the Portuguese word 'Vallado', which means a fence) was constructed which permanently solved the problem. With this, about 400 acres of land was reclaimed, drained and was rented out for farming. The crowded inner city also got land to expand inwards and new residential areas came up in Mahalaxmi, Kamathipura, Tardeo, and Bycullah.The Bellasis Road causeway was built joining the west to the east coast, extending all the way from Malabar Hill to Mazagaon.

The last of the islands to be joined were the Colaba and the Little Colaba. In 1796, the island of Colaba had been declared as a cantonment area, and people used boats to go there, which were often overcrowded, leading to accidents. The Bombay Council suggested the construction of a causeway and persuaded the Directors to agree to it by stating the advantages that would accrue.The construction was completed in 1838 and both the islands were joined to Bombay by the Colaba Causeway.

Thus the task of joining the seven islands was completed by 1838. The resultant island city that emerged is what constitutes south Bombay at present.

Map of the Islands of Bombay and Colaba, 1843, based on the Map made by Mr. Robert Murphy, a newspaper editor.
Source: Wikimedia Commons