They say that the color of revolution is red. Not always. Sometimes, it’s blue. It was the Summer of 1859 in Bengal when thousands of ryots (peasants) refused to grow indigo for the European planters (owners of land and indigo factories). It was a show of rage and undying resolve. It became one of the most remarkable peasant movements of Indian history. It came to be called the Neel Bidroha or the Indigo Revolt.

Indigo was being cultivated in Bengal since the end of the 18th century. It was practiced mainly in two forms, the Nij-abad and the Ryoti . In the Nij or ‘own’ system, the planter produced indigo on lands that he directly controlled. In the Ryoti cultivation, the ryots cultivated indigo on their own lands as part of a contract with the planters. 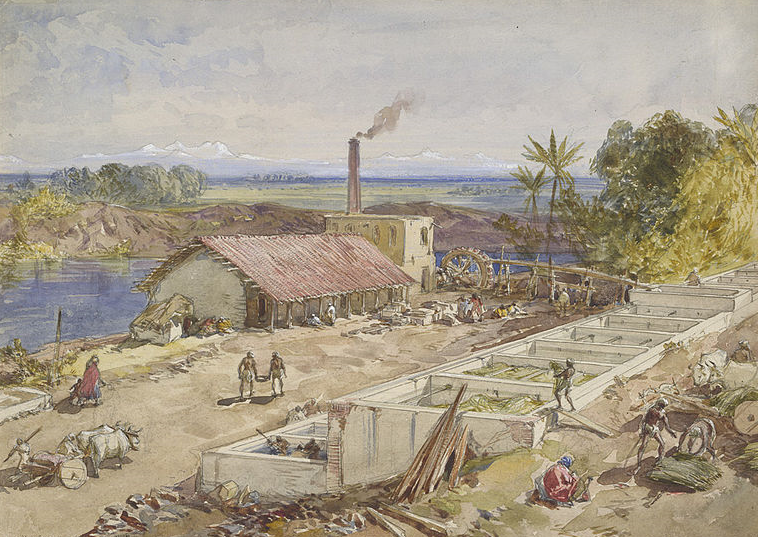 A painting of an Indigo factory

The planters gained land rights in a number of ways. They took waste or unoccupied lands on temporary or permanent leases from the Zamindars. They also acquired Zamindari and Taluqdari rights. At times, Indigo cultivation would also be carried out on the lands of ryots who had died without an heir or who had abandoned their villages.

Ryoti was the predominant form of indigo cultivation in Bengal. The ryots sowed indigo under a contract system. It extended to a period of either one, three to five or ten years. At the inception of the contract, the planter made an advance payment to the ryot to meet the expenses of cultivation. In return, the ryot agreed to cultivate indigo on his land.

The advances were generally made in October or November at the rate of two rupees per beegah. As per the contract, the land had to be sown with indigo, weeded and delivered at the indigo factories owned by the European planters where the plant was processed into a dye. 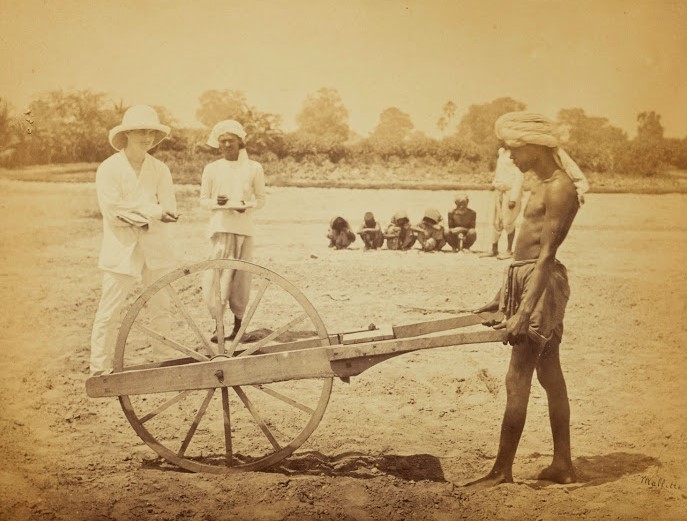 At the close of the manufacturing season in August or September, the accounts used to be drawn out. The debit included the cost of advance (generally at two rupees per beegah), the cost of the stamp paper on which the contract was signed (two annas) and the cost of four to five seers of seeds charged at four annas per beegah. The credit included the value of indigo plant bundles delivered by the ryot to the factories at 4 to 8 bundles per rupee. The average return of a beegah was about 10 to 12 bundles. Between the debit and credit amount, a balance was struck and payment was made accordingly. If he had a ‘fazil’ or excess then he was paid. If not, then a debt was set against him. Despite the debt, a fresh advance was given to him for the next season. However, the debt was deducted from the full advance amount and the ryot received only the remaining sum for the next agricultural season. In some cases, if the debt was too high, the ryot did not receive any fresh advance and was trapped into sowing indigo without it! 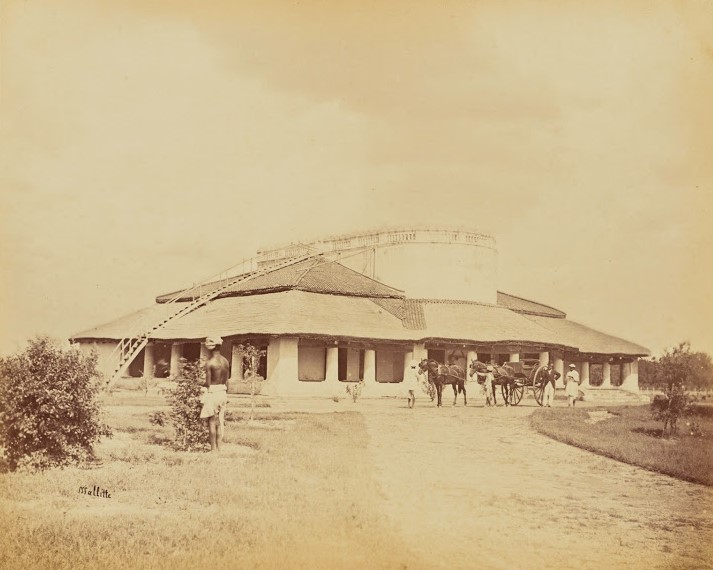 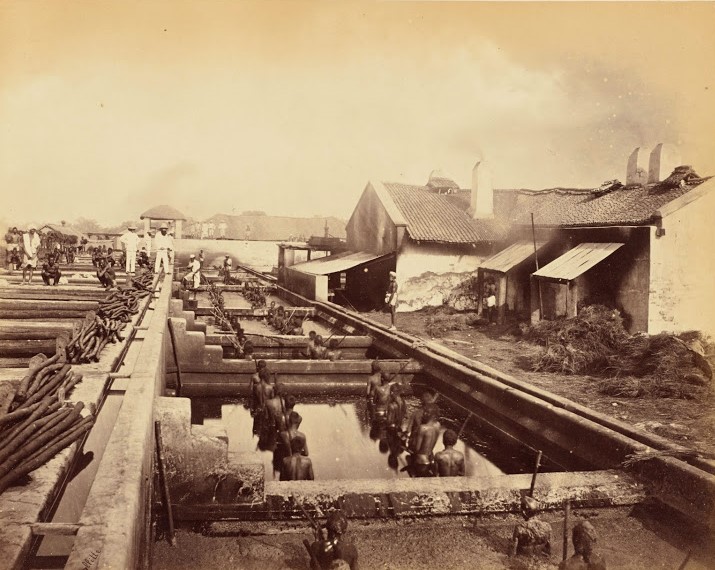 The system of indigo cultivation was inherently exploitative. Emerging in 1859 in the Nadia district, the Bidroha spread to in different districts of Bengal in the 1860s. The peasants attacked indigo factories with spears and swords. Planters who demanded rent were beaten. Even women participated by fighting with pots and pans. It was especially powerful in the Pabna district where the ryots vehemently refused to sow indigo.

When J.P. Grant, the Lieutenant Governor of Bengal was traveling along the Kumar and Kaliganga rivers in Bengal, he witnessed that the riverbank was lined with villagers praying for a Government order against the cultivation of indigo. Women also collected in groups to stand for the cause. Grant felt a deep meaning in such a powerful demonstration over so large an extent of the country.

It was in light of the general unrest surrounding indigo cultivation that a Commission was set up in March 1860 to inquire into the ills of the system. The Indigo Commission, as it came to be called was constituted of 5 members including: W.S. Seton Karr and R. Temple who represented the British government , Rev. J. Sale represented the Christian Missionaries , W. F. Ferguson represented the European planters and Chandramohan Chatterjee represented the Zamindars. 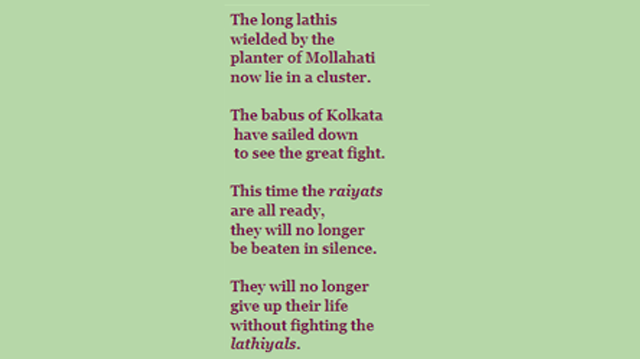 English translation of a song sung by the ryots during the Neel Bidroha. Source: NCERT book. 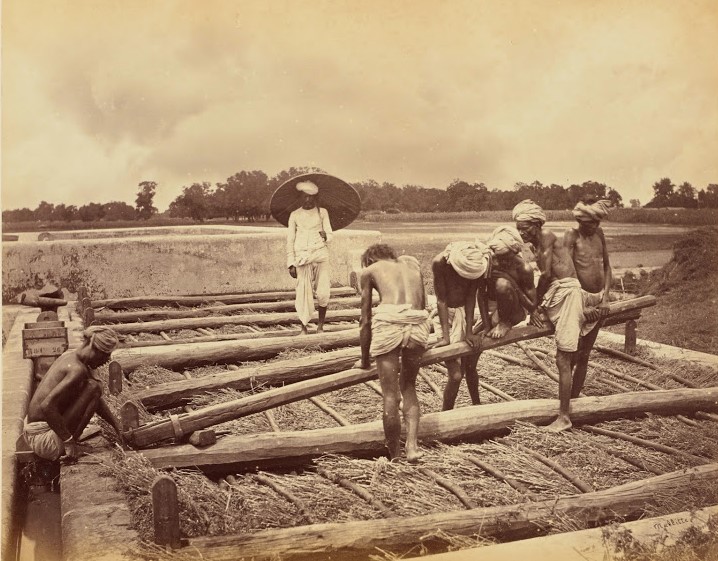 After hearing the testimony of 134 people, including planters, Christian missionaries, magistrates, Zamindars and ryots, the Commission finally submitted its report in August 1860.

The Commission found that the indigo cultivation system was oppressive in nature especially because of the system of advances. Some were willingly lured by it because they had to pay rent and celebrate the annual festival of Durga Puja while others suffered under it because their father or grandfather had taken the advance and now they were captured in a cycle of debt. “The son sows because he believes that he is responsible for his father’s debt.”

F.Schurr, a Christian Missionary who lived in Kapasdanga told the Commission that he did not know about one ryot who had willingly accepted advance. They were compelled to grow indigo and if they refused, they wouldn’t have been allowed to cultivate anything else.

This compulsion also took the shape of strict supervision of the agricultural operation by factory employees because they thought of the Bengali population as 'indolent, procrastinating and faithless' in character. For the ryots it was rather ‘vexation and harassment.’ They complained that time and again they were made to plough, to crush the clods, to remove stalks, to smooth the ground, until neither their time nor their labor could be called their own. They were subjected to perpetual indignities, so much so that they began to hate the very name of indigo.

How does one come to hate a crop? It was found that indigo cultivation was not profitable for the ryots at all. It was such an absolute truth that even the planters couldn’t deny it. One of them confessed to the Commission that “the cultivation is not popular because it’s not profitable and the ryot has to bear the whole brunt of the risk.”

Besides, ryots did not have any say in the choice of lands. The planter decided which part of land will be sown with indigo. It was not even bid for. The planter chose it solely according to his wish.

Thus, Ashley Eden, the magistrate of Barasat told the Commission that indigo cultivators were not free agents. They were under compulsion. He said, ryots were compelled to give consent to a system which was unprofitable and led to harassment and violence against them.

The oppression wasn’t just economic in nature. What rendered the ryots utterly powerless was the exercise of physical force on them by planters and their servants. A ryot, Abadi Mundal recalled that one day when his cattle were grazing on the plain, 50 or 60 latthials (lathi wielding men employed by planters to terrorize ryots) came and started taking his cattle away. When he tried to resist, he was mercilessly beaten up and then kidnapped for eight days. “I was wounded on head and the thigh, of which I still bear the marks,” he said. 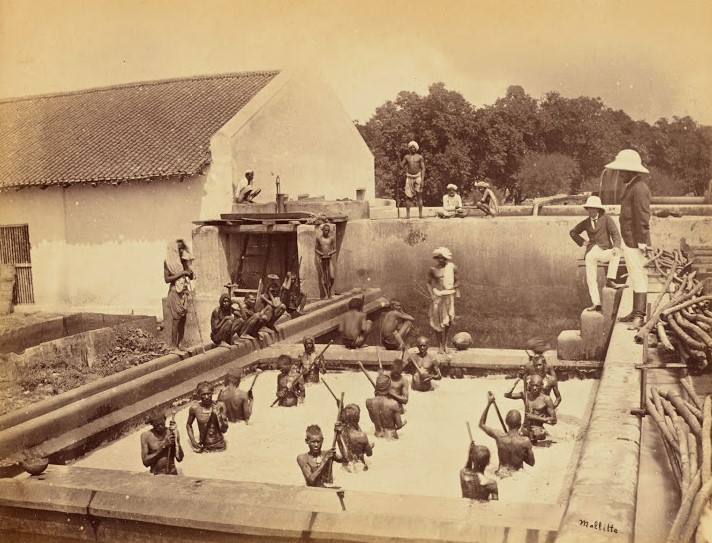 Ryots beating indigo plant in the vat with hand at the factory. Photo by Mallitte.
Source: Old Indian Photos. 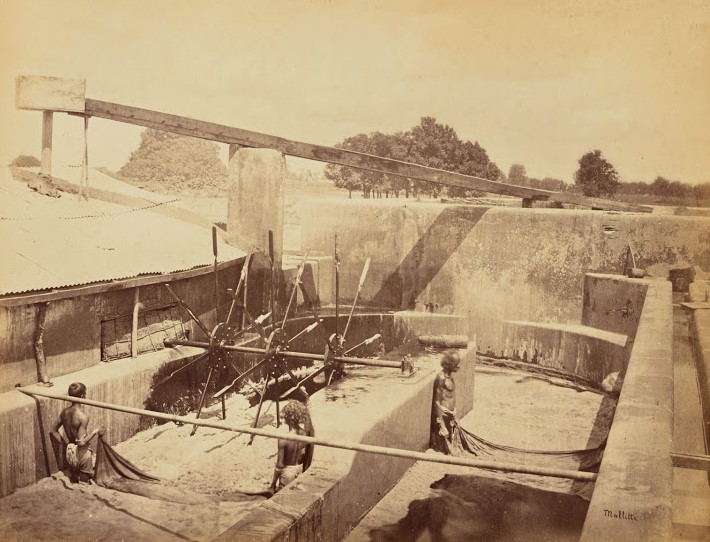 Apparatus to beat indigo plant in the vat at the factory. Photo by Mallitte.
Source: Old Indian Photos.

F.Schurr recounted another incident when a factory assistant came to the rice field and demanded that all ryots immediately go to the indigo field. One peasant requested the assistant to let him complete his work and then he would do as instructed but he was met with aggressive blows from the European assistant.

The indigo Commission found the existence of grave offences like kidnapping of men, carrying away of cattle and uprooting plants to make way for indigo. It mattered little, stated the Commission whether the ryot took his first advance willingly or reluctantly, the result was the same, “he was never afterwards a free man.”

Ashley Eden stated that from 1839 to 1859, 49 cases of murder, homicide, riot, arson, dacoity, plunder and kidnapping related to indigo cultivation were recorded in his district . W.J. Herschel, the officiating magistrate of Nadia also submitted a report recording numerous cases of the same nature in Nadia.

Because of the exploitative nature of the contract system, many ryots took advances and then refused to perform as per their contracts. This especially escalated during the protest movement. At the request of the Indigo Planters Association, Act XI of 1860 was passed which criminalized ‘Breach of Contract’ by the ryots. The planters used this law to further their control and oppression of the peasants. A huge number of suits were filed against them.

In conclusion, the Commission declared that the relation between the planter and the ryot was in ‘unsatisfactory’ condition. It mainly suggested the following reforms. First, the ryot should sow indigo according to his wishes and terms. Second, the contract should be simple in nature, extending not more than 12 months and there shouldn’t be any renewal if the peasant failed to meet his engagements to avoid the accumulation of debt. Third, factories should pay for the stamp paper, not the ryots. Fourth, the selection of land for indigo should be negotiated equally by both the parties. Fifth, the expense of delivering the plant by cart or boat to factories should be borne by the factories, not the ryots. 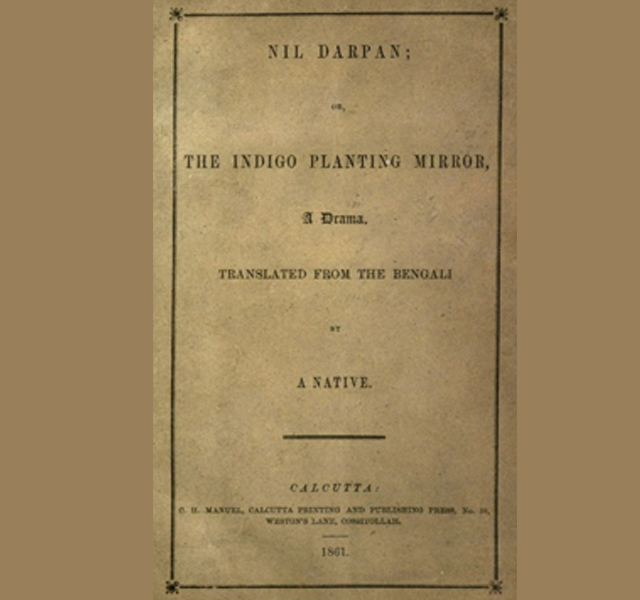 Cover of the English translation of Nil Darpan in 1861 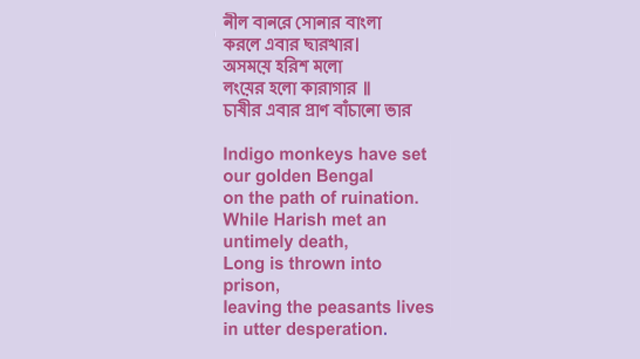 A bidroha song about the death of Harish Chandra Mukherjee, the editor of Hindoo Patriot and the arrest of Rev. James Long who was associated with the translation of Nil Darpan

The Neel Bidroha inspired literature, music and films. Dinabandhu Mitra’s play Nil Darpan or the ‘Mirror of Indigo’ remains a classic because it was written during the movement in 1859. It narrated the sufferings, oppression and struggle of indigo cultivators.

The ryots struggled through poverty, oppression, domination and indignities. But even amidst this, they didn’t let their voices die. What remained constant throughout was their resolve to not sow indigo. A statement of one of the ryots named Panjee Mulla beautifully captures this feeling, “I would rather be killed with bullets than sow indigo.”

indigo cultivation was not profitable

riverbank was lined with villagers

I would rather be killed with bullets than sow indigo