The Jagannath Temple celebrates many festivals throughout the year. Arguably the grandest celebrations take place for the Nobo Koliboro. The Nobo Koliboro celebrates the rebirth of the Lord Jagannath, His transmigration from one body to another. This ritual takes place every 15-19 years. The Jyaistha (June-July) month with two full moons in the adhimasa year marks the auspicious time for the ritual.

The Bana Yaga yatra is the first festival of the year. Participants of the yatra re-enact Lord Jagannath’s arrival at Puri. The Gajapati ruler of Puri allocates roles to various actors. The roles of Vishwavasu (the tribal devotee of Nilamadhava), Bidyapati, the first Brahmin to lay eyes upon Lord Jagannath, the Lenka Sevak, the temple functionary in charge of writing and Vishwakarma, the architect and divine engineer of the universe are assumed by the men.

The main actors tie a special Khandua (a silk fabric woven using dyed threads) on their foreheads. This Khandua has verses from the Gita-Govinda hand woven on the cloth. They embark on a trek to Dasaphalla to seek out a tree from which the deity can be carved and which is deemed suitable to host the Bramha (soul) of the Lord.

En route, they stop at the Mangala Devi temple in Kakatpur and offer her gifts on behalf of the Lord. In return, they seek her blessings to find the tree. During their rest at the Devi Matha, it is said that the Vishwakarma Servitors dream about the location of the tree. Next morning, they seek out the Daru (tree). Upon finding the tree, the Lenka garlands it and installs the Sudarshana (the weapon of lord Vishnu) beneath it. 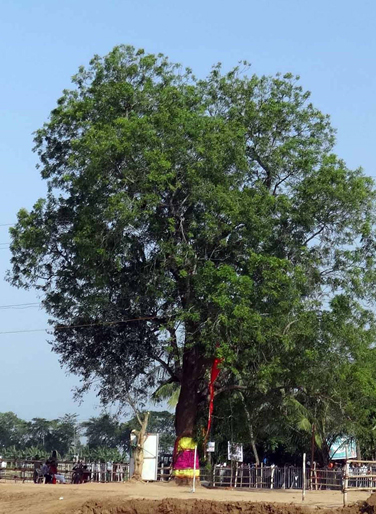 The tree selected as a part of the Bana yaga Yatra. 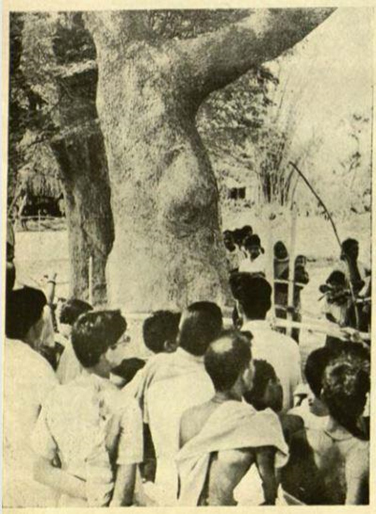 ‘Nimba tree spotted out for Navakalevara’. Plate number 49 from ‘The Cult of Jagannath’ by K.C. Mishra, published in 1971.

The tree is then bathed and worshipped. It is touched with a gold and silver axe before the Vishwakarma servitors cut into logs which are called Chaupata. A cart made of tamarind wood is brought to carry these holy logs back to the temple. The Chaupata are wrapped tightly in silk and bound with Khandua cloth before they are roped into place on the cart. 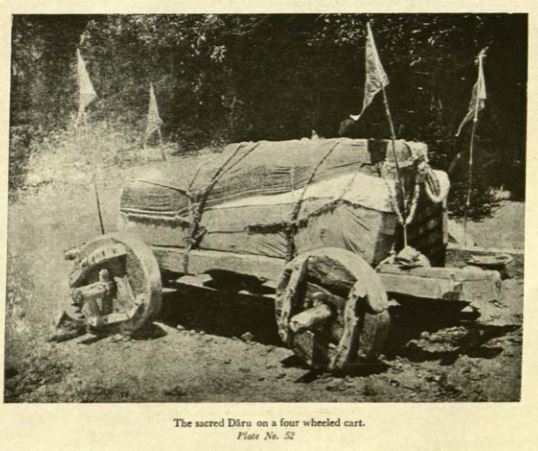 ‘The sacred Daru on a four wheeled cart’. Plate number 52 from ‘The Cult of Jagannath’ by K.C. Mishra, published in 1971. 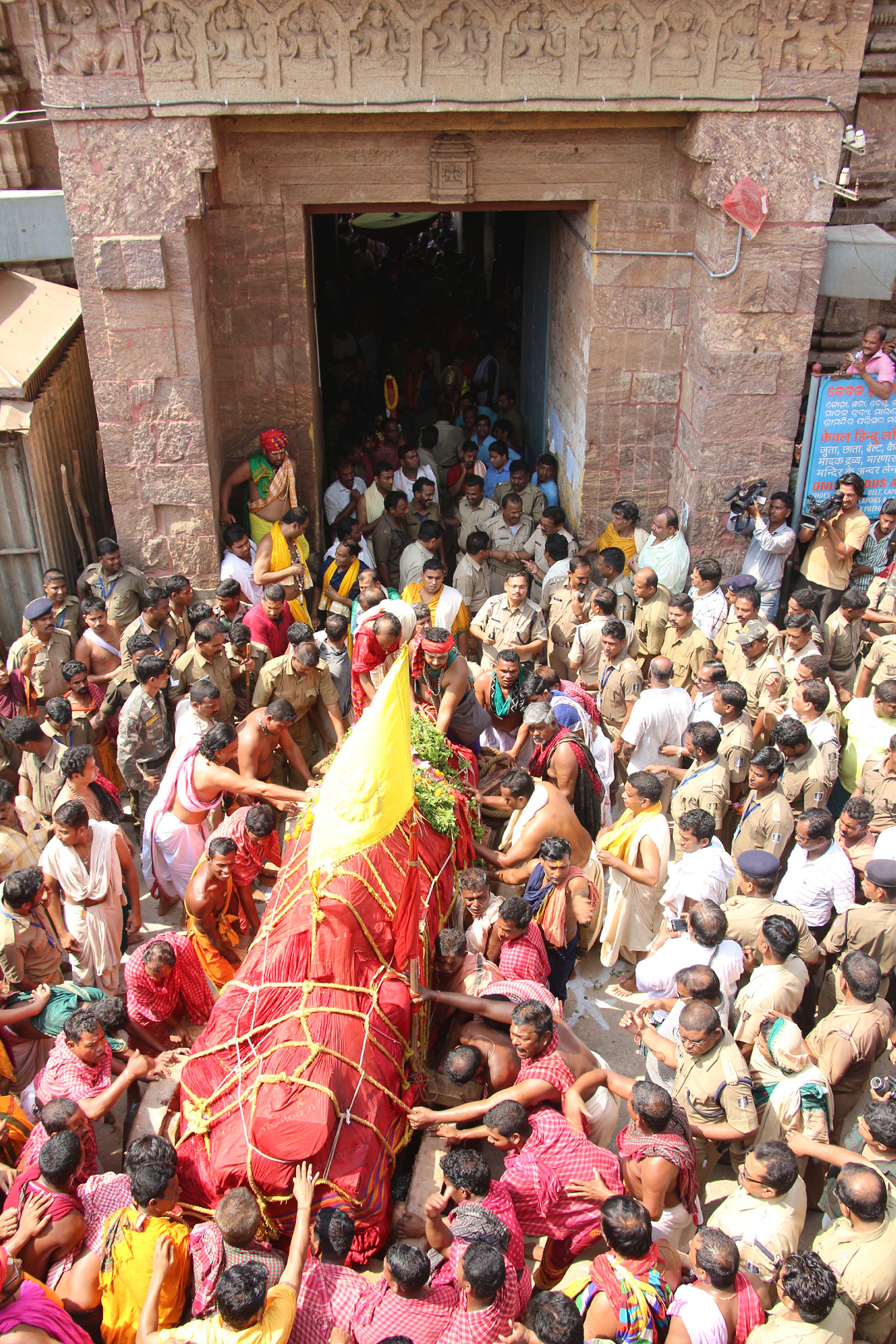 The Daru selected for the idol of Balabhadra entering from the Hastidvara, the northern gate.

The logs are brought into the Temple at Puri and kept at the Nirman Gruha (“the house of creation”), hidden from public view for one month. Only the senior priests are allowed to partake in sculpting the new body of the Lord. It is the prerogative of the eldest priest to perform the Ghata Paribartan (“the transfer of the Bramha”). The former idol and parts of the rath from the previous year are buried after a suddikriya (a purifying ritual) is performed. 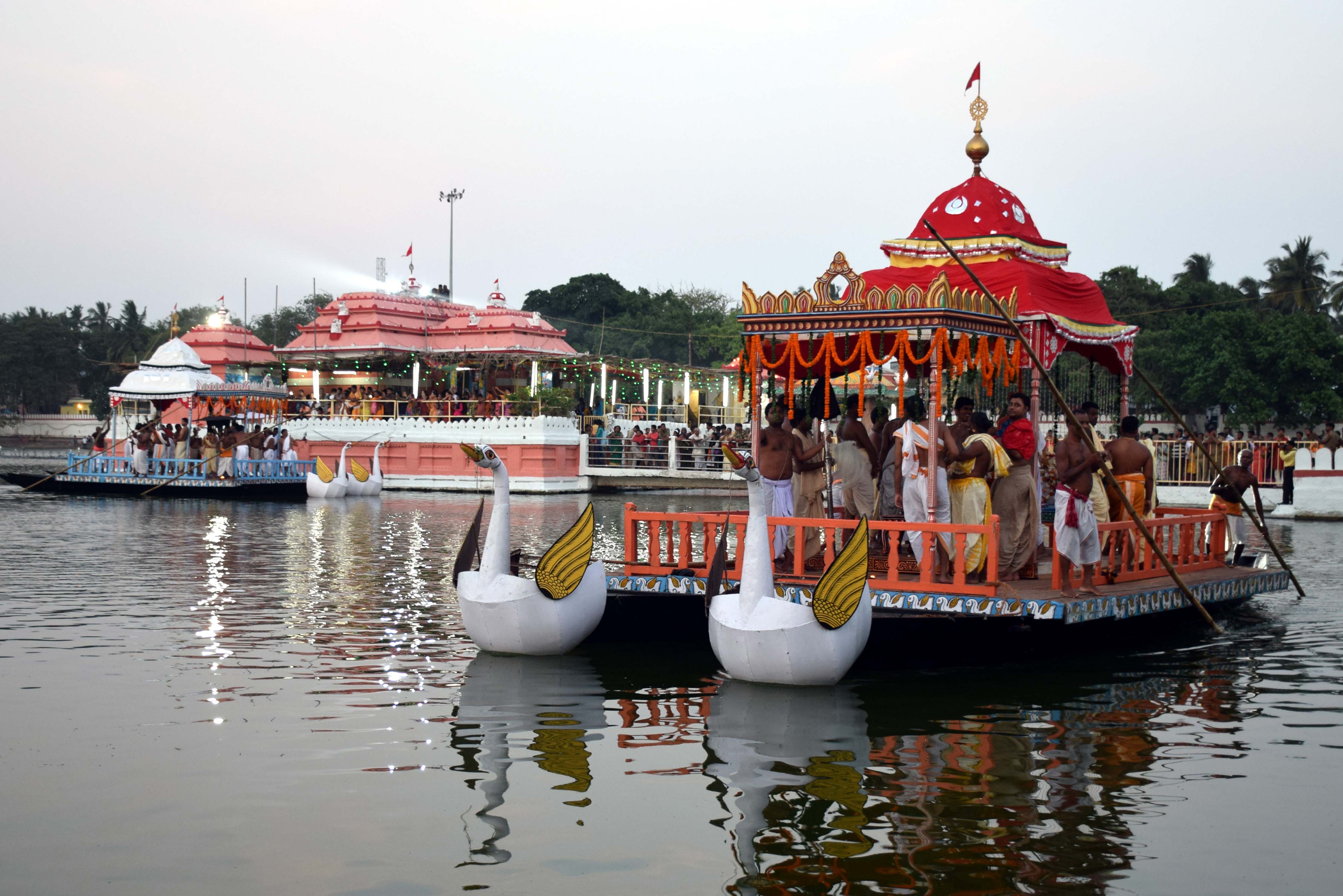 A photograph of the Chandan Yatra. The Lord as Madanmohan ji boating on the Narendra Tank.

In the month of Jyaistha, the birthday of the Lord is celebrated as Snan Yatra. The Lord and His siblings are brought out amidst the sound of loud bugles, music and celebrations. As per tradition, they are decorated with floral crowns, covered from public view and bathed with a hundred and eight pots of water from the Suna Kuan (golden well), a well within the temple complex. 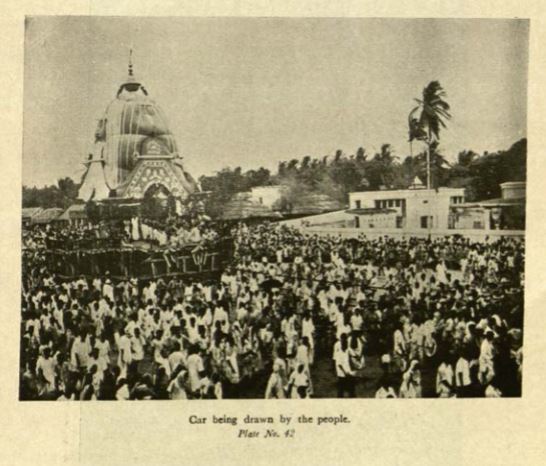 ‘Three chariots standing in a row’. Plate number 39 from ‘The Cult of Jagannath’ by K.C. Mishra, published in 1971. 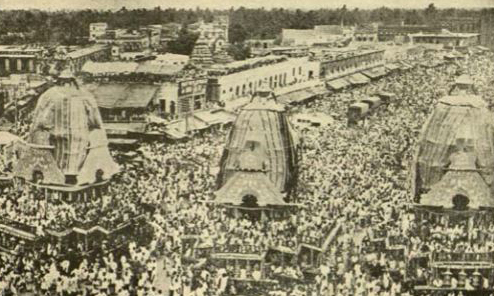 ‘Rath yatra scene in the pedestal of an old temple found near the Dhanmandal Railway Station in the district of Cuttack’. Plate number 39A from ‘The Cult of Jagannath’ by K.C. Mishra, published in 1971. 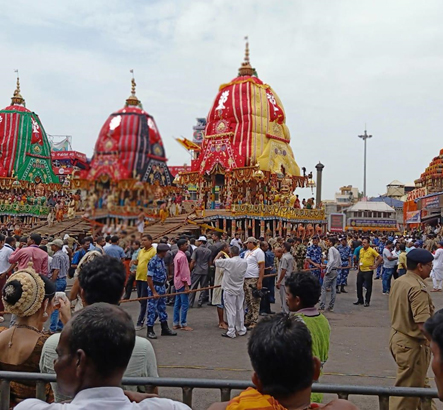 A photograph of the three raths of Subhadra Balabhadra and the Lord (from left to right) stationed on the Badadanda prior to the Rath Yatra.

After their bath, the deities are dressed in Hastibesha (the garb of an elephant) for a darshan. This ritual is rooted in popular memory. It is believed that once a renowned Hindu scholar was invited by the Gajapati ruler to his court. The king invited the scholar to accompany him for a visit to SriMandir but the scholar refused, claiming that he only worshipped Lord Ganesha. The reluctant scholar was however surprised when Lord Jagannath appeared to him as the beloved elephant god, Ganesha. The Hastibesha symbolises the love the Lord has for each of His followers.

It is believed that the deities catch a cold after this elaborate bath. They retire from public view for fifteen days in order to recover. This period is called Anavasara. The Netroutsav is performed by painting the eyes onto the freshly bathed bodies of the Lords. The next day marks the beginning of the Rath Yatra.

“When the sacred images are at length brought forth and placed upon their chariots, thousands fall on their knees and bow their foreheads in the dust. The vast multitude shouts with one throat and surging backwards and forwards drag the wheeled edifices down the broad streets towards the country house of Lord Jagannath.” - Imperial District Gazetteer, Puri, 1886

A rath is built for each of the three deities, Lord Jagannath, Goddess Subhadra and Lord Balbhadra. Each houses the main deity along with nine others. Nine sages are also depicted on each chariot. These are meant to signify the nine planets in the universe. A rath can be recognised by its specific name, its colours, its charioteer, its horses and even the reins used to control them. 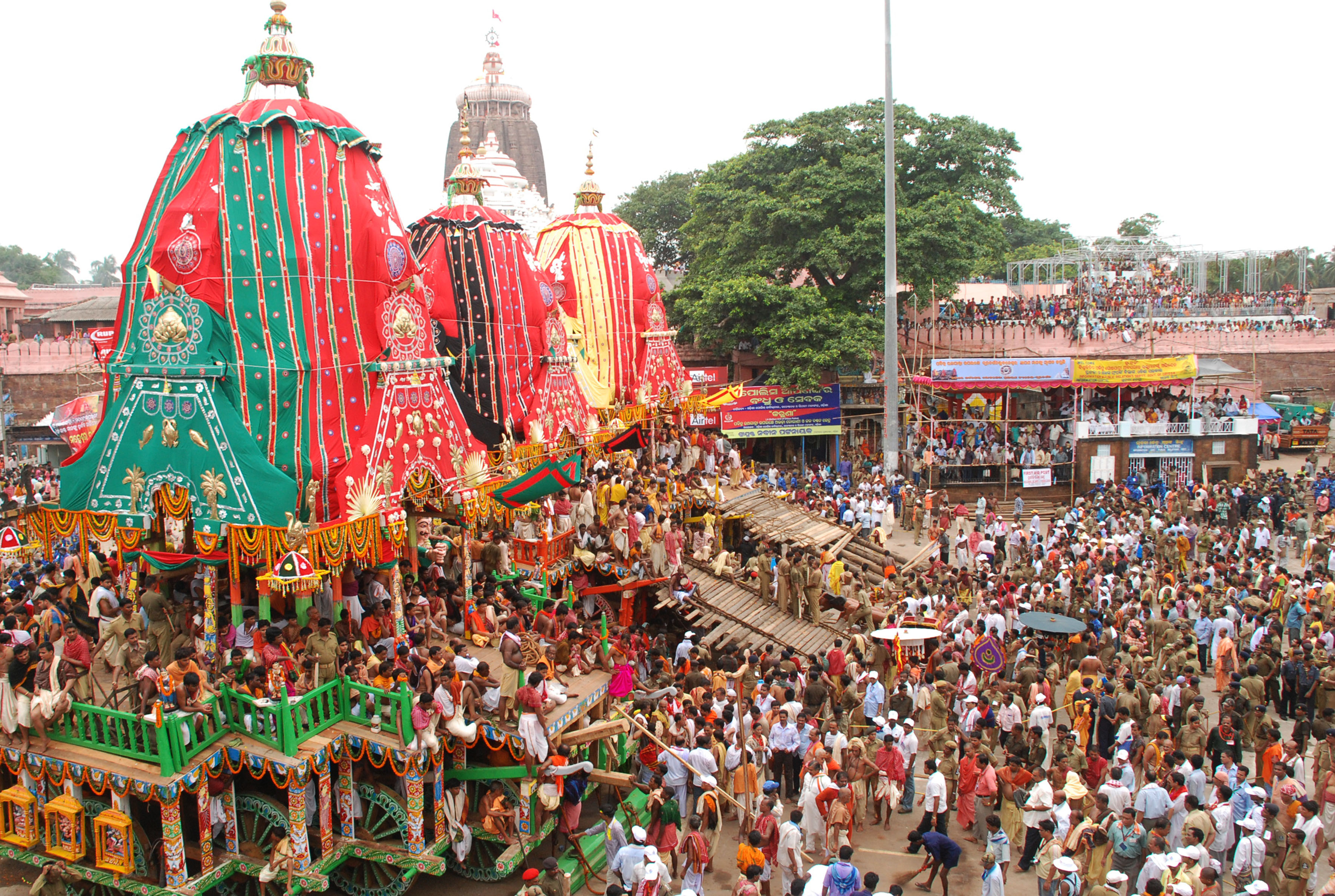 A photograph of the three raths of Subhadra Balabhadra and the Lord (front to back) stationed on the Badadanda prior to the Rath Yatra.

The largest rath soaring at forty-five feet is the red and yellow chariot of Lord Jagannath. It is called Nandighosa and it alone takes two months to construct. The horses Shankha, Shveta, Balahaka and Haridasva have the honour of pulling the Lord’s chariot. Maruti, the Lord’s charioteer reins the horses. 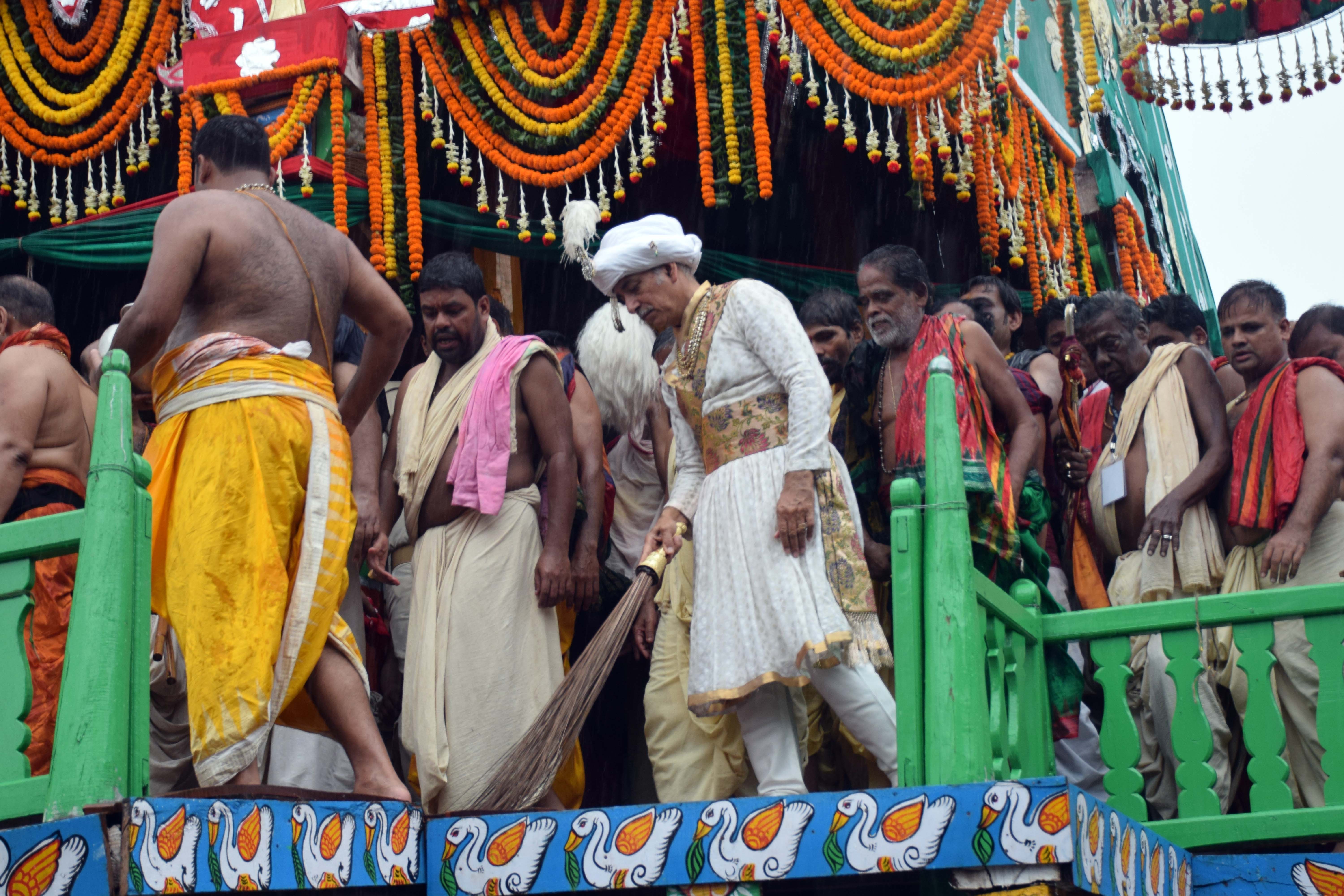 Gajapati Maharaja Dibyasingha Deb, the aadyasevak of Lord Jagannath performing the ‘Chera Panhara’, the ceremonial sweeping of the Rath before the Yatra.

The festivities are inaugurated by the Chera Panhara.In this, the Gajapati ruler, as a ‘servant of the Lord’, sweeps the platform of each rath before they are allowed to proceed. Devotees pull these large chariots three kilometres down the main avenue to the ‘Garden home’ of the deities, the house of their aunt, Gundicha. They stay with her for a week. During this time, it is believed that Goddess Laxmi, upset with her husband, Lord Jagannath for having left her behind, damages His rath in anger. This ritual is practised today as Hera Panchami, ‘hera’ means to look for or find. 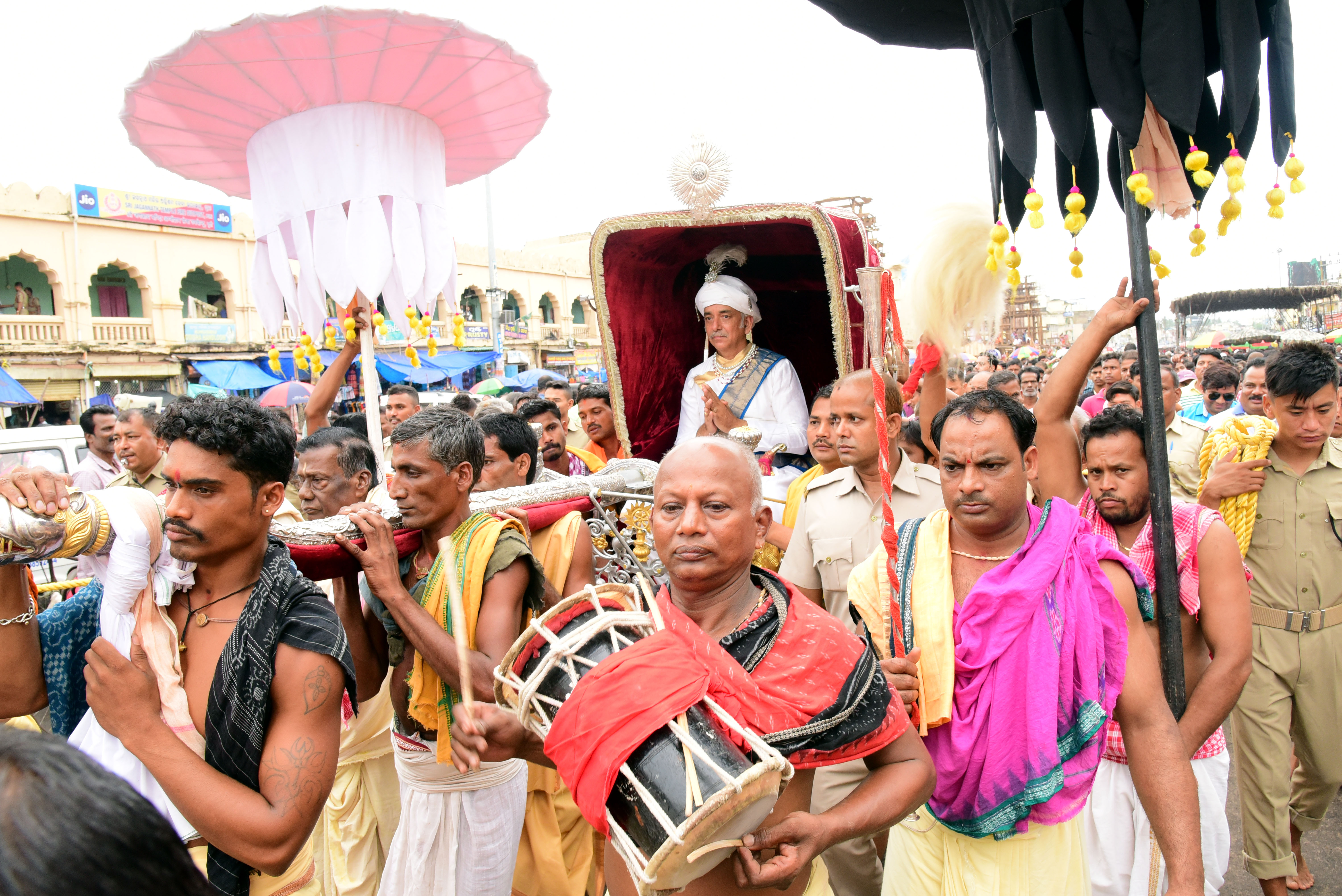 Gajapati Maharaja Dibyasingha Deb, the aadyasevak of Lord Jagannath arriving at the Jagannath Temple on the day of the Yatra.

The three siblings leave their Aunt’s house and embark on the ‘Bahuda Yatra’ (the return journey). They are received in Srimandir by doting devotees awaiting their arrival. The ‘Sunabesha’ is the gold-laden form the deities take after adorning all the jewellery made from the offerings by their devotees. This short darshan marks their homecoming.

The Lord of the Universe, however, is not allowed to step into His home just yet. It is believed that Goddess Laxmi is still upset at Her Lord. Distraught, she shuts the door and refuses to let Him enter.The Lord of the Universe attempts to convince Her of His intentions and seeks Her forgiveness. After persistent appeals, the goddess allows Him to step into His home.

The yatra ends with the Niladri Bije, which marks the return of the deities into the Garbha-griha. In 1825, 2.25 lakh pilgrims thronged to the Puri Temple, 190 years later (2015) the Nobo Koliboro celebrations saw a record 17.5 lakh devotees joining the celebrations at Puri. 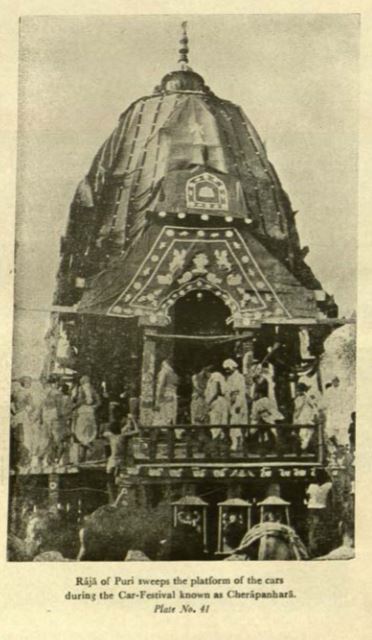 ‘Gateway of the Gundicha Mandir’. Plate number 43 from ‘The Cult of Jagannath’ by K.C. Mishra, published in 1971.

SMTP Error: Could not connect to SMTP host.